Where is The Serpent’s Charles Sobhraj Now?

Samsung’s Exynos 2200 is a direct competitor to Apple’s M1 chip.

In Asia, Vivo leads smartphone shipment in the fourth quarter of 2020

NAC planes will fly to China to deliver oxygen cylinders

Bamdev Gautam: Will back Nepal-Khanal but not Oli if UML splits

No Result
View All Result

No Result
View All Result
Home Nepal Breaking News Others

Where is The Serpent’s Charles Sobhraj Now?

in Others, World
Reading Time: 3 mins read
A A
0

Where Is The Serpent’s Charles Sobhraj Now?

A few months after its BBC premiere, The Serpent has become a Netflix success. Charles Sobhraj (played by Tahar Rahim) is seen in the drama going on a crime spree that spanned several years, many countries, and several stints in prison (including a prison escape that allowed him to escape the death penalty in another country). The drama comes to a close with his final arrest in 2003, when he returned to the one nation where he was wanted for unexplained reasons.

Where is The Serpent’s Charles Sobhraj now?

The BBC and Netflix show comes to a close with a series of title cards that update the plot. They are as follows:

“The reasons for Charles Sobhraj’s decision to return to Nepal in 2003 are still a mystery to the outside world, and he knows them only.

“He was sentenced to life in prison by a Nepalese court in November 2004 for the murder of Connie Jo Bronzich in December 1975.

“The United Nations Human Rights Committee stated in 2010 that he did not have a fair trial.”

“In 2014, a Nepalese court found Sobhraj guilty of the December 1975 murder of Laurent Carriere. He was given a new 20-year term.

“He was already imprisoned in Kathmandu in December 2020.

“Despite a warrant for his arrest released by Thai police in 1976, Charles Sobhraj never returned to Thailand and has never been prosecuted for any crimes there.”

“Sobhraj is presumed innocent in the absence of a guilty verdict.”

Sobhraj has given many reasons for returning to Nepal in the early 2000s. He told police he was going to make a documentary about Nepali handicrafts, according to The Guardian. He then told Andrew Anthony, a journalist who interviewed him in prison in 2013, a different story.

“Over the course of a few mind-boggling hours, he recounted a fantastical plot in which he said he had been working for the CIA in a ruse to capture Taliban guerrillas buying weapons from the Chinese triads,” Anthony told The Guardian. After all, these aren’t Nepalese handicrafts.”

Sobhraj has married for the third time, which is not stated in The Serpent’s ending title cards. In October 2008, the Times of India announced that he had married Nihita Biswas, a 20-year-old woman, at the age of 64. Biswas had met Sobhraj while serving as an interpreter for his French lawyer. Biswas rose to prominence after featuring on the Indian version of Big Brother, Bigg Boss, in 2011.

In an interview with the Times of India in 2008, Biswas said of her relationship with Sobhraj, “I don’t know what he was.” “What he’s doing now is important. I’ve seen how he looks after his family, and he’s a decent guy. We have a great friendship… He’s not guilty. There isn’t a shred of evidence against him.”

Sobhraj’s health has reportedly deteriorated in recent years. Dr. Ramesh Koirala, for example, wrote Charles Sobhraj, Inside The Heart Of The Bikini Killer, in 2018, in which he discusses performing open-heart surgery on the killer.

ALSO READ  Locals prepare to defy as Kathmandu prepares for another jatra season, which comes with yet another Covid-19 surge alert 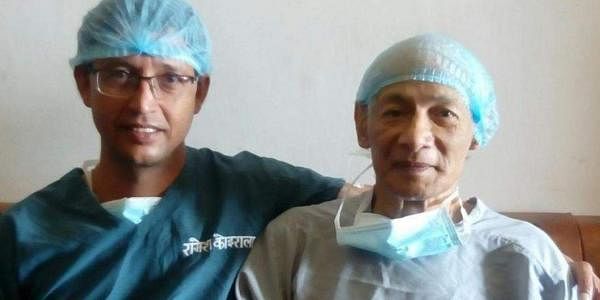 Due to Sobhraj’s “extreme mitral and tricuspid regurgitations,” a disorder in which one’s heart valves no longer close properly, allowing blood to flow backwards through one’s heart, he writes about fixing and replacing his heart valves.

According to the Mayo Clinic, this may make patients feel tired or out of breath, or even cause cardiac arrhythmias or heart failure in the worst-case scenario. In his novel, Koirala also claims that Sobhraj suffered from other ailments such as leg swelling and pulmonary fluid. “Do whatever you think is best for me, doctor,” Sobhraj says, according to Koirala. “I just want to live.”

The Serpent is now available to watch on Netflix.

On Tuesday, Nepal received 400 oxygen cylinders from its northern neighbor China to aid in the battle against the Covid-19...

The ongoing lockdown in the Kathmandu valley, officially known as a prohibitory order, has been extended for another 15 days–until...

NAC planes will fly to China to deliver oxygen cylinders

Nepal Airlines Corporation (NAC), the country's flag carrier, is flying to Beijing tonight with a wide-body A-330 aircraft to deliver...

This year’s SEE, Grade XII exams have been postponed indefinitely as well

The National Examinations Board has agreed to postpone the final examinations for grades X (Secondary Education Examinations) and XII, which...

What does NEPSE Index Mean?

Best Way to Get Your Freelancing Income in Nepal

Samsung’s Exynos 2200 is a direct competitor to Apple’s M1 chip.

In Asia, Vivo leads smartphone shipment in the fourth quarter of 2020